A couple of days ago, Alice and I sat down with Ketty, armed with pictures of Magwero school, maps, 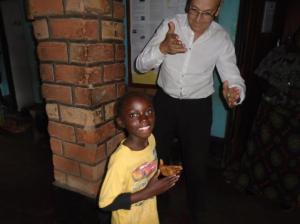 Gulp, I was dreading it. Some days Ketty is so small and vulnerable and needy I thought she might completely freak at the idea. ‘We can always delay until next year’, I said to Alice. ‘No’, was the reply, ‘She has to go, she needs this’. Alice is made of sterner stuff than I, fortunately.

I showed her the first picture of Magwero. She broke into a huge smile, pointing at herself, questioning. Yes, we nodded. She was so excited, then made the ‘sleeping’ sign questioning again. ‘Yes’ we said, you’ll stay there.

So that was cool. My concerns dissipated in a moment! I showed her all the school stuff I’d brought, school bags, exercise books, pens, sleeping bag, etc, and scenes of delight and excitement. Cool. That’s that bit done. I’ll do a post when we’ve taken her there next week.

A non profit organisation sponsoring an aid project in Zambia. View all posts by Ulingana