Start typing and press
Enter to search
Skip to content

Life here can be hard.

This post is an eye-opener for anyone who doubts that life is tough here.

We have Cholera in the area. Spread from the slums of Lusaka where the pollution of wells (main supply of drinking water) by nearby pit latrines (holes in the ground) has had inevitable consequences.

The schools will not start again on the 15th because of Cholera. There will be a review on Jan. 30th.

It’s almost lucky (!!!???) that the rains appear to be failing again for the second time in three years in Eastern Province, as Cholera is a waterborne disease and the compounds become flooded when the rains are good. At least The ridiculous Potato-head President of the United States assures us that global warning is not a problem.

The crops will probably fail; it’s too early to say yet. The government is supposed to support the population by giving food aid. They probably won’t as they have huge debt to pay.

Ketty had Malaria. An inevitable consequence of living here even if you have a mosquito net. You just get ill for a while, sometimes very ill. You feel dreadful. Then her grandmother had malaria straight after her, Then her mother. They’re all recovering or have recovered. It’s the annual competition for survival; will it be a mild illness this year or severe, even life-threatening?

Most of my friends here work for an NGO as ‘volunteers’ which means that they’re not covered by Zambian minimum wage. They get paid less than a dollar a day. They work up to 9 hour days but there are no other jobs in the area.

One positive note; I was invited by the Chief of this area to go to New year celebrations at his Palace. I was treated as an honoured guest and sat with him as The Nyau dancers (a secretive male sect) performed the ritual dance of ‘Gule Wamkulu’ accompanied by shouted vocals answered by singing from the girls of the community, and drumming to get deep under your skin. Awesome, powerful.

Happy new year to everyone. 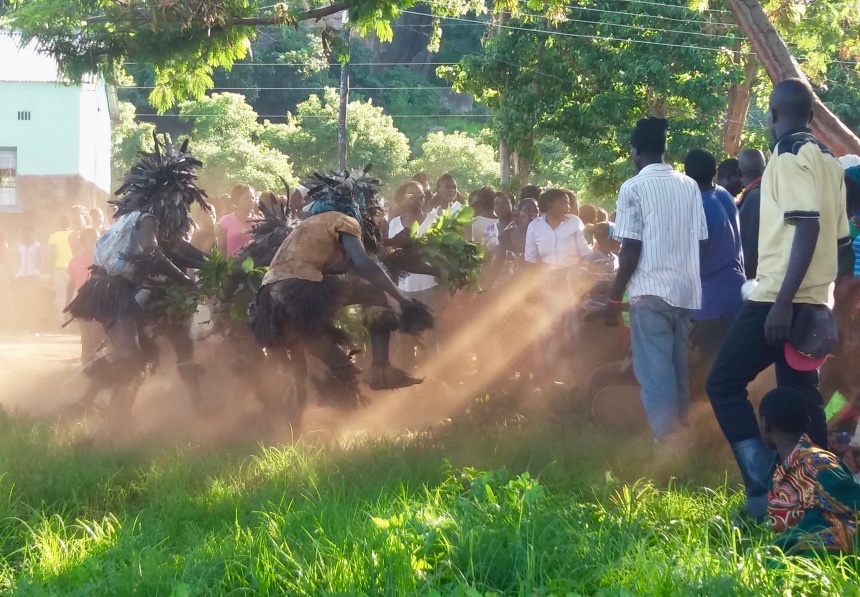 4 replies to Not all plain sailing